Laboratory Technician Apprentice Rebecca May recently returned from an incredible trip across the Atlantic Ocean.  Rebecca was offered the brilliant opportunity by her employer Plymouth Marine Laboratory. Funded through the Lloyd’s Register Foundation the annual ‘Atlantic Meridional Transect’ is a scientific cruise undertaken every autumn to carry out chemical, biological and physical oceanographic research across the Atlantic Ocean.  The research ship, RRS Discovery, set sail from Southampton on 23rd September and sailed for 6 weeks, arriving in the Falkland Islands on 5th November. 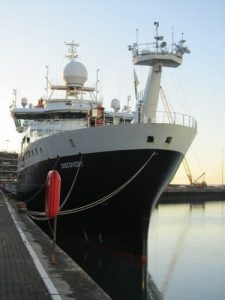 During the 6 weeks at sea, the ship came to stop at two sampling stations per day – one at pre-dawn, and one at noon – to deploy various instruments which would take measurements and collect water samples from depths up to 500m.

Rebecca had some important roles on the cruise; she took water samples from five depths at each station and undertook analysis for dissolved oxygen using the Winkler titration method.  The data she collected was then used to calibrate the ship’s own oxygen sensor.  Rebecca also analysed phytoplankton communities using flow cytometry.  Rebecca plans to undertake some further analysis of samples now she has returned to work, including total alkalinity and dissolved inorganic carbon.

Other measurements undertaken on the cruise included experiments with microscopic sea snails to test the effects of ocean acidification; analysis of nutrients present in seawater; optical measurements to validate satellites owned by the European Space Agency; analysis of dissolved greenhouse gases; meteorological measurements; and more. Rebecca May collecting seawater on board RRS Discovery

Rebecca said, “For me the best thing about being involved in the cruise was getting the chance to meet scientists from around the world and gain an understanding of what they were each researching.  I think this will really help me in my apprenticeship as I have gained a real understanding of some of the different aspects of oceanography, and the ways in which they are all linked.  One of the highlights of the trip was the ‘crossing the line’ ceremony when we crossed the Equator.  This involved anyone who had never crossed the line at sea before being captured by ‘police’, put on trial by ‘King Neptune’ and being punished for their sins by having buckets of disgusting slops poured on their heads; as horrible as it sounds, it was loads of fun!”

Rebecca was also lucky enough to see plenty of wildlife on her travels including flying fish, squid, pilot and humpback whales and albatrosses.  The cruise also stopped off at South Georgia, an Antarctic Island in the Southern Atlantic, where she saw hordes of elephant seals, fur seals and king penguins.

Rebecca is due to complete her apprenticeship with Plymouth Marine Laboratory in October 2018, supported by South Devon College.

For more information on the Laboratory Technician apprenticeship click here