The English Riviera Film Festival celebrates the creative talent from the South West region. The award categories reflect the wealth and diversity of the independent film industry in the region. 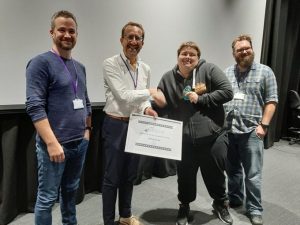 Nathan was overwhelmed at the announcement and wishes to pursue a career in Film and TV production.

Hosted at the South Devon College Hi Tech & Digital Centre, the awards event featured a South West film premiere of ‘Troll Bridge’ alongside screenings of various films as well as the opportunity to meet the cast and crew and the presentations of the awards.

For more information visit the Film Festival’s website or discover where studying a digital media course at South Devon College could take you!