The second heat of the Major Series was action packed from the very beginning as things got underway. The students, who came from four different colleges, South Devon, City College Plymouth, Exeter College and Cornwall College, set the bar high with their fabulous creations and the standard on the day was very impressive.

Things began with the Street Food Challenge, which was judged by Major’s very own Brian Eastment and 2014/15 winner of the Major Series, Lucy Faulkner. With four heats taking place on the day, it was one of the most popular challenges and the students took us all over the world with their dishes making excellent use of Major’s Mari Bases to create their flavours. “It’s important to remember that for some of the students, this is their first time competing in a competition. It’s an excellent stepping stone for them and I was really pleased to see so many of them coming forward for feedback after the results,” said Brian Eastment, Executive Development Chef at Major. 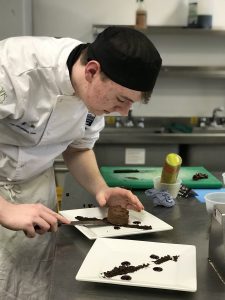 Over in the Statics Area, some imaginative Afternoon Tea services were wowing the judges with their creative themes and the bread loaves put out for the Bread class were equally as good looking. “The standard shown across the statics today was first class but the creative use of flavours in the Bread did great justice to Major’s magnificent range of products,” said Wayne Harris, Chairman of the Judges from the Craft Guild of Chefs, “the passion and creativity I’ve seen on display all day holds really well for the industry going forward and makes me excited to see what the next few years will bring.”

There was a great atmosphere running through the corridors of South Devon College all day as the competition continued, largely due to the enthusiasm and support given to the students by their lecturers. South Devon College was an excellent host and coped well with having over twice as many entries this year as last. “We’ve been involved with the Major Series for several years now and it’s one of the highlights of our year. The students get so much out of it in terms of their studies as it gives them the chance to experiment with products they will come into contact with in the future and allows them to build on the classic skills they are learning in class to create something fantastic with them,” said Mark Provan, Programme Co-ordinator for Hospitality and Catering at South Devon College. 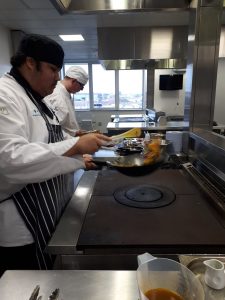 As the heats continued, focus turned to The Chicken Challenge where level 2 and 3 students were battling it out to win a spot in the grand final at the Great Hospitality Show in 2019. The two judges, Major’s Fergus Martin and previous finalist Matt Thorning, were wowed by the students’ creations, which made great use of Major’s Mari Bases to produce some exceptional flavours. “I was really impressed to see the students using modern techniques in their cooking and I would love to see them looking at their presentation in order to really elevate their dishes in the future but the flavours we saw today were amazing,” said Fergus.

Meanwhile, level 1 students were showing us what they could do in the Pasta Challenge, which saw them present two identical bowls of pasta incorporating at least one Major Mari Base, Stock Powder or Mushroom and Cheddar Stock Base Pastes. A brand new class for the 2018 Major Series, the students at South Devon made excellent use of the Major products in their dishes earning two bronzes and a silver medal from the judges.

Finally, the Restaurant Skills and Assorted Coffee challenges, judged by Charles Russell and Louise Barton, saw the students display their front of house skills in napkin folding, themed table layout, non-alcoholic cocktail making and flavoured coffees, exploring the uses for Major’s concentrated Fruit Bases. There were several creative themes seen in the Restaurant Skills, including one table centred on Victorian invention and the coffees produced wowed the judges with their balanced flavours. “It’s always fantastic to see the students improving year on year and we were truly blown away with what the students came up with today,” said Louise. “It’s really encouraging to see them thinking about the story behind their tables as well as what’s on them and they’d worked really hard to make sure their coffees had balanced flavours.”

At the end of a busy day of heats, it was time for the awards ceremony and the room was filled with excited chatter as we waited for them to announce the results. A testament to the students’ talent and hard work, medals were won across the board. 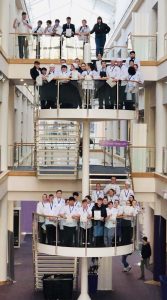 The overall standard of class entries were some of the best the judges have seen in the last few years, with South Devon College winning 2 Merits, 6 Bronze , 21 Silver and 10 Gold with a best overall in the Coffee Challenge awarded to Level 3 student Gaevyn Allwood.