South Devon College’s Performing Arts students and staff have recently returned from Disneyland, Paris after performing and entertaining the visitors in the Videopolis Theatre. The three-day trip was the culmination of months of rehearsals, fundraising and preparations to get the seventeen students there and ready to perform. 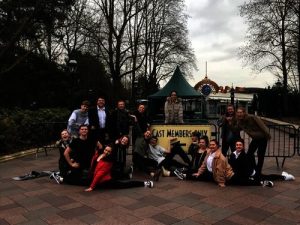 Karma Tucker, Performing Arts lecturer and organiser of the trip said “I wanted to give the students a fun and exciting professional industry performance experience. They were fantastic both on and off stage; we are all extremely proud of them”. For many of the students, it was their first trip abroad and an opportunity for them all to bond with their peers. Performing Arts relies heavily on trust and support within a company so a trip like this helps in so many ways, not just in the fantastic performance experience. The students were also full of positive praise with comments such as “It was so much fun!” and “I loved performing on stage, I was very nervous beforehand but we had such a great response, I wanted to do it all over again!”. 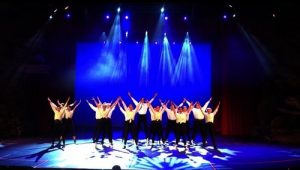 Their performance also went down really well with the audience; directly after the show the group received a message on the South Devon College Performing Arts and Music Facebook page from a member of the audience which was full of praise. 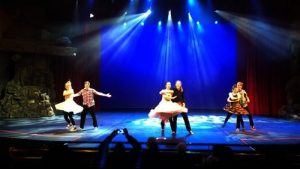 The group are now back at College and busily rehearsing for their next performance, The Addams Family Musical which is being performed in the South Devon College Theatre at the Paignton campus on 19th, 20th and 21st March.

After this the students will go into their Final Major Projects, where they will put into practice all the different disciplines they have studied this year. Shanaz John, Programme Co-ordinator for Performing Arts is already planning next year’s trip, with a view to taking a group to Greece to explore the origins of theatre and tying in with the study and performance of Classical Greek Theatre.

If you want to know more about Performing Arts at South Devon College and to get a chance to share in other exciting events in the future, then come along to our next open evening on 4th April, 4pm-7pm at the Paignton Campus. Click here to register.

Visit shop.southdevon.ac.uk to purchase tickets to the Addams Family performance.