Former Public Services student Lily Gardner collected her Duke of Edinburgh’s (DofE) Gold award from Buckingham Palace.  The ceremony was attended by members of the Royal Family as well as celebrities from the worlds of art, culture and sport. 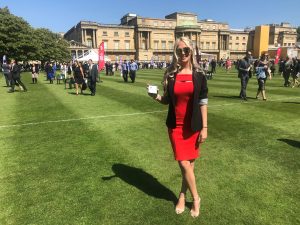 Lily’s achievement was especially hard-earned as she arranged all the sections of the award herself. For her ‘Volunteering’ section, she helped out for 12 months at Lupton House by transforming the gardens and the interior of the house. Lily has always been fascinated by old buildings and this really boosted her knowledge of restoration and refurbishment, and gave her the opportunity to work on an interesting and valuable community project.

She also worked incredibly hard on her ‘Physical’ section, coming in to College at 7am to improve her fitness. She was also successful in reaching her target of improving her beep test times. This led to her Residential as Lily undertook a week working with the Army at Okehampton Camp, getting a great taster of Army life and meeting new people from all over the country. Lily’s award wasn’t all hard work though – her family were pleased that she learned cooking for her ‘Skill’ section and, in the words of her father, she went from ‘beans on toast’ to making up her own great recipes over a matter of months.

However, for Lily the highlight was her Expedition. She arranged to sail round the south coast of Devon in a historic vessel with a local expedition company and became a key member of the expedition team. They learned how to navigate and sail a ship at sea, and enjoyed great weather on their expedition. It was hard work and great fun and Lily felt it really improved her confidence and leadership skills. 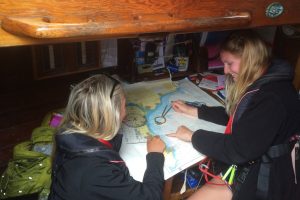 Having completed her Gold Award Lily was invited to Buckingham Palace, along with her father and Rich Blagden from South Devon College, where she was presented with her award by Sophie, Countess of Wessex. She also mingled with other celebrities including Mary Berry, Levi Roots, Paul Hollywood, Frank Skinner, Nina Wadia, Warwick Davis and Imelda Staunton. Imelda presented Lily with her Gold Award in person as part of the ceremony. 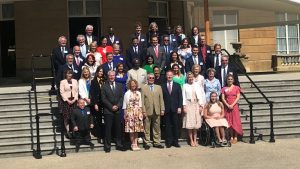 Rich Blagden DofE coordinator at South Devon College said, “It was an incredible day and as we all sat on the lawn in Buckingham Palace Gardens is was a great time to reflect on the hard work that went in to Lily’s award but also the satisfaction it has given her.

“We would like to congratulate Lily on this fantastic achievement. We believe she is the first Gold Award achiever to have come from South Devon College so we are especially proud of her efforts. We are sure that Lily’s story will inspire others to take up the DofE challenge in the future.”

If, like Lily, you’re looking to improve your skills and fitness, want to help your community and would like the challenge of an expedition, then the DofE is for you! South Devon College runs an active DofE programme and if you want to take part contact Rich Blagden at [email protected].