South Devon College Performing Arts and Music students collaborated on a musical performance of ‘Schools Will Rock You’, a unique initiative launched by Queen, Ben Elton and the producers of the worldwide hit musical, ‘We Will Rock You’.

The students worked together on all aspects of the production including, singing, dancing, acting, music and technical support. The experience enabled them to develop their own version of the show and create a real industry environment, learning and enjoying every aspect of putting together a stage production along the way. 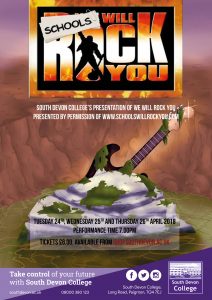 The story of ‘Schools will Rock You’ includes a multitude of hits from the band Queen and is set in the unspecified, vaguely Orwellian future. Earth’s name has been changed to Planet Mall. As the name would suggest, mainstream commercial conformity reigns. Everywhere on the planet, people watch the same movies, listen to computer-generated music, wear the same clothes and hold the same thoughts and opinions. Musical instruments and composers are forbidden, and rock music is all but unknown. Representative government has been eliminated. All are controlled by the Worldwide mega-corporation Globalsoft, which is headed by the “Killer Queen” and the commander of her secret police, the evil Khashoggi. Those who dare to stand against Globalsoft’s enforced conformity are kidnapped and “brain stormed” into submission.

The show received rave reviews on the South Devon College Performing Arts and Music Facebook page. Comments included “It was really entertaining. Well done to you and all the cast and crew. What a talented bunch. We loved it” and “Well done, all of you! We really enjoyed it!”