Stephen Criddle, Principal and CEO at South Devon College, was included in the Queen’s New Year’s Honour List 2018 and was invited to London to receive an OBE for Services to Education.

The investiture was held at Buckingham Palace and the Honours were presented by HRH The Duke of Cambridge.

Stephen has worked in education for over 25 years, from leadership and management roles in the South West of England and consultancy work across the country to leading South Devon College as Principal and CEO for nearly 10 years, serving the communities of Torbay and South Devon. Born in Birkenhead, he attended school there before studying Geography at Jesus College, Oxford. He then qualified as a Chartered Accountant and worked in industry before joining the Education Sector in 1992. Stephen is passionate about the importance of further education in social mobility and raising life chances, being the first person in his family to benefit from a university education. He is a champion for the importance of high quality careers information, advice and guidance and education business partnership working to inspire young people and help encourage prosperity for all. 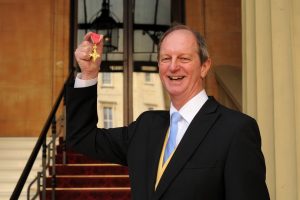 Since 2002, Stephen has contributed to and steered South Devon College’s expansion to a leading Further and Higher Education College, widely recognised for its highly inclusive approach and ambition for the area and its students. In his 15 years at the College, it has expanded its work with local communities to develop a vibrant University Centre provision, a Newton Abbot campus of three local centres and a dedicated Marine education facility at Kingswear, as well as actively supporting a very large range of local partnerships and voluntary project work through student and staff activity.

Stephen has contributed more widely as a board member of the Heart of the South West Local Enterprise Partnership and recently joined the TEDC in Torbay, working to support economic regeneration and community benefit. He is also active as a board member and trustee of a number of other local and national educational institutions and charities.

Stephen has overseen many accomplishments at South Devon College.

The College offers an inclusive and wide-ranging curriculum, developed in consultation with local employers. It features highly in national league tables for student satisfaction and performance and is an IIP Platinum organisation.

Stephen said, “It was an incredible day and I feel deeply privileged to have received this special award from HRH The Duke of Cambridge. He was very interested in South Devon College and its educational role in the community. It was a very special moment for myself and my family.”

South Devon College continues to move ahead with two major awards in 2017 for Higher Education (a Teaching Excellence Framework (TEF) Gold award), and an Investors in People Platinum Award for leadership practice and culture. In April 2018, building work will commence on the College’s new £17m Hi-Tech & Digital Centre, which will have world class resources to support the jobs of the future and future generations of students. It is also progressing well on the journey towards gaining degree awarding powers for University Centre South Devon.

Dr Karen Stockham Chair of Governing Body at South Devon College said, “The Governing Body of South Devon College is very proud to acknowledge the award of OBE to its Principal, Stephen Criddle. The award recognises the unrelenting passion and drive Stephen has for serving the education and skills needs of the communities of Torbay and South Devon. His dedicated and high-level leadership has successfully steered the College to its current position as a vibrant and locally-relevant provider of education, employment and skills. We warmly congratulate him.”