Stephen Criddle OBE, Principal and CEO of South Devon College, has received an honorary Master of Education degree from Plymouth Marjon University for his contribution to education. 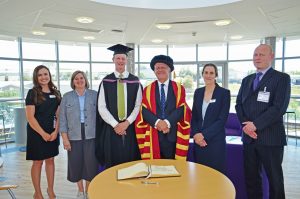 Stephen has worked in education for over 25 years and has led South Devon College for nearly 10 years, serving the communities of Torbay and South Devon. He has expanded the College’s work with local communities to develop a vibrant University Centre provision, a Newton Abbot campus of three local centres and a dedicated marine education facility at Kingswear.

Professor Rob Warner said: “I was immediately struck from the first time I visited South Devon College that Stephen is a man of dedication and principle, whose fervent belief in the transformative power of education has not dimmed. Stephen is well known and immensely highly regarded for his inspiring and outstanding leadership at South Devon College. He is committed to providing excellent educational and employment opportunities for both the students and the area of Torbay and South Devon”. 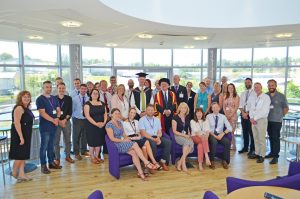 Stephen said: “I was proud and humbled to receive this recognition from Plymouth Marjon University peers in front of the South Devon College leadership team.  Values based leadership is at the heart of strong educational organisations and I was delighted that Professor Warner very much recognised this at South Devon College” .

In 2018 Stephen received an OBE for services to education.

For more information on this piece, please email [email protected]